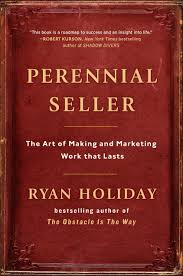 Related: The Obstacle is the Way, Ego is the Enemy, The Daily Stoic, Growth Hacker Marketing, Thought Catalog

I’m a big fan of Ryan Holiday in general, and this book is another good one.

Generally an instruction manual for exactly what the title says: “Making and Marketing Work that Lasts”.  It’s one of his most actionable books, going into detail about the pre-, during and post-process of creating great work.

Some of the most interesting parts of the book for me:

Definitely worth reading for any entrepreneurs, creators or artists alike.

This book examines every part of the process from the creative act to creating a legacy. It will teach you:

Part I: THE CREATIVE PROCESS: From the Mindset to the Making to the Magic

Here are some good ones:

In the course of creating your work, you are going to be forced to ask yourself: What am I willing to sacrifice in order to do it? Will I give up X, Y, Z? A willingness to trade off something— time, comfort, easy money, recognition— lies at the heart of every great work.

These might seem like small questions in the face of a big task like creating a classic work that lasts— but classics are built by thousands of small acts.

So the creator of any project should try to answer some variant of these questions:

What sacred cows am I slaying?

Part II: POSITIONING: From Polishing to Perfecting to Packaging

Part III: MARKETING: From Courting to Coverage, Pushing to Promotion

What Do We Have to Work With?

Other than the “when,” the most important part of a launch is the “what”— as in: What are we working with here?

OK, I Still Want to Get Press

Part IV: PLATFORM: From Fans to Friends and a Full-Fledged Career

The best way to create a list is to provide incredible amounts of value. Here are some strategies to help you do that:

There is a second kind of “list” that matters just as much as the list I’ve been describing: your list of contacts, relationships, and influencers. Build success by building your network:

Some of Tim’s strategies:

Build a Body of Work:

Reach Out to New Fans

Some questions to ask yourself:

CONCLUSION: What’s Luck Got to Do with It?