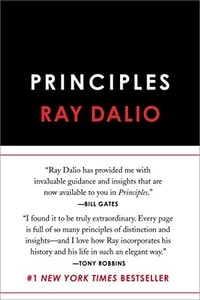 A fascinating book with an extraordinary amount of information.  It’s difficult to get through because of the sheer quantity of information, but worth reading for Part 1 and 2 alone (focused on Life Principles).

Part 3 is the complete list of principles based around running Bridgewater, and is mostly relevant for running a large (or at least, not small) organization, so may be of limited use to some.

Would certainly recommend reading the first two parts in detail, and then investigating only the rules you find interesting in Part 3.  Overall, a practical guide to both life and running an organization, and a brief look into the mind of one of the world’s top performers.

Part 1: The Importance of Principles

Part 2: My Most Fundamental Life Principles

My Most Fundamental Principles

My most fundamental principle:

Your Most Important Choices

In summary, I believe that you can probably get what you want out of life if you can suspend your ego and take a no-excuses approach to achieving your goals with open-mindedness, determination, and courage, especially if you rely on the help of people who are strong in areas that you are weak.

If I had to pick just one quality that those who make the right choices have, it is character. Character is the ability to get one’s self to do the difficult things that produce the desired results

In summary, I don’t believe that limited abilities are an insurmountable barrier to achieving your goals, if you do the other things right.

In other words, “The Process” consists of five distinct steps:

You need to do all these steps well in order to be successful.

To help you do these things well—and stay centered and effective rather than stressed and thrown off by your emotions—try this technique for reducing the pressure: treat your life like a game or a martial art.

2. Identifying and Not Tolerating Problems

4. Designing the Plan (Determining the Solutions)

Most importantly, ask yourself what is your biggest weakness that stands in the way of what you want.

It is difficult to see one’s own blind spots for two reasons:

Because I believe that you will achieve your goals if you do these five steps well, it follows that if you are not achieving your goals you can use the 5-Step Process as a diagnostic tool. You would do this by 1) identifying the step(s) that you are failing at; 2) noting the qualities required to succeed at that step; and 3) identifying which of these qualities you are missing.

In a nutshell, my 5-Step process for achieving what you want is:

As you design and implement your plan to achieve your goals, you may find it helpful to consider that:

Life is like a game where you seek to overcome the obstacles that stand in the way of achieving your goals;

You get better at this game through practice;

[Graham]: There are 210 principles in this section, many focused on the details of running a large (or at least not small) organization, and so I’ve left many out.  I’ve included ones I’ve found most relevant at the time of writing.

Be extremely open and truthful, and create an environment in which all your people speak up.

5) Have integrity and demand it from others.

5a) Never say anything about a person you wouldn’t say to them directly , and don’t try people without accusing them to their face.

8) Create a culture in which it is ok to make mistakes by unacceptable not to identify, analyze, and learn from them.

10) Do not feel bad about your mistakes or those of others. Love them! Remember that 1) they are to be expected, 2) they’re the first and most essential part of the learning process, and 3) feeling bad about them will prevent you from getting better. People typically feel bad about mistakes because they think in a short-sighted way that mistakes reflect their badness or because they’re worried about being punished (or not being rewarded).

24) Be assertive and open-minded at the same time. Just try to find out what is true. Don’t try to ‘win’ the argument.

26) Recognize that conflicts are essential for great relationships because they are the means by which people determine whether their principles are aligned and resolve their differences. I believe that in all relationships, including the most treasured ones, 1) there are principles and values each person has that must be in synch for the relationship to be successful and 2) there must be give and take. I believe there is always a kind of negotiation or debate between people based on principles and mutual consideration. What you learn about each other via that “negotiation" either draws you together or drives you apart.

31b) People who have repeatedly and successfully accomplished the thing in question and have great explanations when probed are most believable. Those with one of those two qualities are somewhat believable; people with neither are least believable.

33e) 1+1=3. Two people who collaborate well will be about three times as effective as the two of them operating independently because they will see what the other might miss, they can leverage each other, and they can hold each other to higher standards.

45) Think about their very different values, abilities, and skills. Values are the deep- seated beliefs that motivate behaviors; people will fight for their values, and values determine people’s compatibility with others. Abilities are ways of thinking and behaving. Some people are great learners and fast processors; others possess common sense; still others think creatively or logically or with supreme organization, etc. Skills are learned tools, such as being able to speak a foreign language or write computer code.

54) Weigh values and abilities more heavily than skills in deciding whom to hire.

96) Don’t “pick your battles.” Fight them all.  If you see something wrong, even something small, deal with it.

110) If someone is doing their job poorly, consider whether this is due to inadequate learning (i.e., training/experience) or inadequate ability. A weakness due to a lack of experience or training or due to inadequate time can be fixed. A lack of inherent ability cannot.

111) Remember that when it comes to assessing people, the two biggest mistakes are being overconfident in your assessment and failing to get in synch on that assessment. Don’t make those mistakes.

142) Don’t use the anonymous “we" and “they," because that masks personal responsibility—use specific names.

143) Be very specific about problems; don’t start with generalizations.

151) Remember that a root cause is not an action but a reason. It is described by using adjectives rather than verbs. Keep asking why to get at root causes, and don’t forget to examine problems with people.

152) Identify at which step failure occurred in the 5-Step Process. If a person is chronically failing it is due to either lack of training or lack of ability. Which was it? At which of the five steps did the person fail? Different steps require different abilities.

177) Constantly think about how to produce leverage. For example, to make training as easy to leverage as possible, document the most common questions and answers through audio, video, or written guidelines and then assign someone to regularly organize them into a manual.

177a) You should be able to delegate the details away. If you can’t, you either have problems with managing or training or you have the wrong people doing the job. The real sign of a master manager is that he doesn’t have to do practically anything.

177b) It is far better to find a few smart people and give them the best technology than to have a greater number of ordinary and less well-equipped people. First of all, great people and great technology are almost always a great value because their effectiveness in enhancing the organization’s productivity can be enormous. Second, it is desirable to have smart people have the widest possible span of understanding and control because fragmented understanding and control create inefficiencies and undermine organizational cohesion.

183) Tool: Maintain a procedures manual. This is the document in which you describe how all of the pieces of your machine work. There needs to be enough specificity so that operators of the different pieces of the machine can refer to the manual to help them do their job. The manual should be a living document that includes output from the issues log so that mistakes already identified and diagnosed aren’t repeated. It prevents forgetting previous learning and facilitates communication.

184) Tool: Use checklists. When people are assigned tasks, it is generally desirable to have these captured on checklists so they can check off each item as it is done. If not, there is a risk that people will gradually not do the agreed tasks or there will be lack of clarity. Crossing items off a checklist will serve as a task reminder and confirmation of what has been done.

184a) Don’t confuse checklists with personal responsibility. People should be expected to do their job well, not just what is on their checklists.

192) Understand that the ability to deal with not knowing is far more powerful than knowing. That is because there’s way more that we don’t know than what we could possibly ever know.

192a) Embrace the power of asking: "What don’t I know, and what should I do about it?" Generally you should find believable people and ask their advice, remembering that you are looking to understand their reasoning rather than get their conclusions.

194) While everyone has the right to have questions and theories, only believable people have the right to have opinions. If you can’t successfully ski down a difficult slope, you shouldn’t tell others how to do it, though you can ask questions about it and even express your views about possible ways if you make clear that you are unsure.

197) Considering both the probabilities and the payoffs of the consequences, make sure that the probability of the unacceptable (i.e., the risk of ruin) is nil.

197a) The cost of a bad decision is equal to or greater than the reward of a good decision, so knowing what you don’t know is at least as valuable as knowing.

197b) Recognize opportunities where there isn’t much to lose and a lot to gain, even if the probability of the gain happening is low.

197d) Don’t bet too much on anything. Make 15 or more good, uncorrelated bets.

199a) Don’t be a perfectionist, because perfectionists often spend too much time on little differences at the margins at the expense of other big, important things. Be an effective imperfectionist. Solutions that broadly work well  are generally better than highly specialized solutions, especially in the early stages of a plan.

199b) Since 80% of the juice can be gotten with the first 20% of the squeezing, there are relatively few (typically less than five) important things to consider in making a decision. For each of them, the marginal gains of studying them past a certain point are limited.

207) Understand what an acceptable rate of improvement is, and that it is the level and not the rate of change that matters most. I often hear people say, It’s getting better, as though that is good enough when it is both below that bar and improving at an inadequate rate. That isn’t good enough.