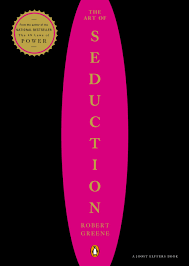 The Art of Seduction by Robert Greene: Summary & Notes

Written in Robert Greene’s typical style of demonstrating universal principles via historical examples, this book is both entertaining and informative.

Not only a book about sexual seduction, but rather a universal guide on seduction in the most general terms - whether it be politically, socially, or otherwise - it’s a book that should be read by all.

You will better understand both yourself and your relationships, and applying the principles will help you across your personal and professional lives.  Highly recommend.

Part One - the Seductive Character

Keys to the Character:

The Natural embodies the longed- for qualities of childhood—spontaneity, sincerity, unpretentiousness.

Naturals also make a virtue out of weakness, eliciting our sympathy for their trials, making us want to protect them and help them.

Remember who you were before you became so polite and self-effacing.

The following are the main types of the adult Natural. Keep in mind that the greatest natural seducers are often a blend of more than one of these qualities

The innocent: The primary qualities of innocence are weakness and misunderstanding of the world

The imp: Impish children have a fearlessness that we adults have lost. That is because they do not see the possible consequences of their actions—how some people might be offended, how they might physically hurt themselves in the process.

The wonder: A wonder child has a special, inexplicable talent: a gift for music, for mathematics, for chess, for sport.

The undefensive lover: As people get older, they protect themselves against painful experiences by closing themselves off. The price for this is that they grow rigid, physically and mentally. But children are by nature unprotected and open to experience, and this receptiveness is extremely attractive.

The Laws of Charm:

Make your target the center of attention.

Be a source of pleasure.

Make yourself useful. If done subtly, your ability to enhance the lives of others will be devilishly seductive.

Follow-through is key: so many people will charm by promising a person great things—a better job, a new contact, a big favor—but if they do not follow through they make enemies instead of friends.

The Art of Charm

The following are basic qualities that will help create the illusion of charisma:

All of these skills are acquirable.

The Seducer’s Victims - the Eighteen Types

The Reformed Rake or Siren.

Keep two things in mind when seducing this type.

Chapter 4 - Appear to Be an Object of Desire - Create Triangles

Chapter 6 - Master the Art of Insinuation

Chapter 9 - Keep Them in Suspense - What Comes Next?

Chapter 10 - Use the Demonic Power of Words to Sow Confusion

Phase 3 - The Precipice - Deepening the Effect Through Extreme Measures

There are two ways to prove yourself.

The key is not just to talk about memories—that is weak. What you want is to get people to act out in their present old issues from their past, without their being aware of what is happening. The regressions you can effect fall into four main types

The Infantile Regression. The first bond—the bond between a mother and her infant—is the most powerful one.

The Oedipal Regression. After the bond between mother and child comes the oedipal triangle of mother, father, and child.

The Ego Ideal Regression. As children, we often form an ideal figure out of our dreams and ambitions. First, that ideal figure is the person we want to be. We imagine ourselves as brave adventurers, romantic figures. Then, in our adolescence, we turn our attention to others, often projecting our ideals onto them.

The Reverse Parental Regression. Here you are the one to regress: you deliberately play the role of the cute, adorable, yet also sexually charged child. Older people always find younger people incredibly seductive.

Chapter 18 - Stir Up the Transgressive & Taboo

Phase Four - Moving in for the Kill

Chapter 21 - Give Them Space to Fall-Pursuer is Pursued

Chapter 23 - Master the Art of the Bold Move

The following are key components to reproducing festival time and place:

Use the visual language of pleasure

Keep it crowded or close.

Distort their sense of time—speed and youth.

Keep everything light and playful, full of distractions, noise, color, and a bit of chaos.

Appendix B: Soft Seduction: How to Sell Anything to the Masses

The less you seem to be selling something—including yourself—the better; By being too obvious in your pitch, you will raise suspicion; you will also bore your audience, an unforgivable sin.

Instead, make your approach soft, seductive, and insidious.

Appear as news, never as publicity.

Make the medium the message.

Start a chain reaction—everyone is doing it.

Tell people who they are.