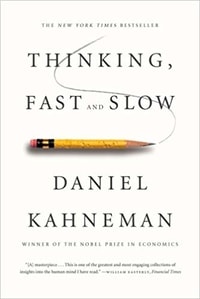 Related: Influence, Mistakes Were Made (But Not By Me)

This is a widely-cited, occasionally mind-bending work from Daniel Kahneman that describes many of the human errors in thinking that he and others have discovered through their psychology research.

This book has influenced many, and can be considered one of the most significant books on psychology (along with books like Influence), in recent years. Should be read by anyone looking to improve their own decision-making, regardless of field (indeed, most of the book is applicable throughout daily life).

Chapter 1: The Characters of the Story

In rough order of complexity, here are some examples of the automatic activities that are attributed to System 1:

The highly diverse operations of System 2 have one feature in common: they require attention and are disrupted when attention is drawn away. Here are some examples:

Chapter 7: A Machine for Jumping to Conclusions

A Bias to Believe and Confirm

What You See is All There is (WYSIATI)

Chapter 10: The Law of Small Numbers

A Bias of Confidence Over Doubt

Chapter 12: The Science of Availability

The Psychology of Availability

The difficulty of coming up with more examples surprises people, and they subsequently change their judgement.

The following are some conditions in which people "go with the flow" and are affected more strongly by ease of retrieval than by the content they retrieved:

One sin of representativeness is an excessive willingness to predict the occurrence of unlikely (low base-rate) events. Here is an example: you see a person reading The New York Times on the New York subway. Which of the following is a better bet about the reading stranger?

Representativeness would tell you to bet on the PhD, but this is not necessarily wise. You should seriously consider the second alternative, because many more nongraduates than PhDs ride in New York subways.

The second sin of representativeness is insensitivity to the quality of evidence.

There is one thing you can do when you have doubts about the quality of the evidence: let your judgments of probability stay close to the base rate.

The essential keys to disciplined Bayesian reasoning can be simply summarized:

Chapter 17: Regression to the Mean

A Correction for Inuitive Predictions

Chapter 19: The Illusion of Understanding

Chapter 20: The Illusion of Validity

A number of studies have concluded that algorithms are better than expert judgement, or at least as good.

The research suggests a surprising conclusion: to maximize predictive accuracy, final decisions should be left to formulas, especially in low-validity environments.

More recent research went further: formulas that assign equal weights to all the predictors are often superior, because they are not affected by accidents of sampling.

In a memorable example, Dawes showed that marital stability is well predicted by a formula:

The important conclusion from this research is that an algorithm that is constructed on the back of an envelope is often good enough to compete with an optimally weighted formula, and certainly good enough to outdo expert judgment.

Intuition can be useful, but only when applied systematically.

To implement a good interview procedure:

Chapter 22: Expert Intuition: When Can We Trust It?

When can we trust intuition/judgements? The answer comes from the two basic conditions for acquiring a skill:

When both these conditions are satisfied, intuitions are likely to be skilled.

Whether professionals have a chance to develop intuitive expertise depends essentially on the quality and speed of feedback, as well as on sufficient opportunity to practice.

Among medical specialties, anesthesiologists benefit from good feedback, because the effects of their actions are likely to be quickly evident. In contrast, radiologists obtain little information about the accuracy of the diagnoses they make and about the pathologies they fail to detect. Anesthesiologists are therefore in a better position to develop useful intuitive skills.

Chapter 23: The Outside View

The inside view: when we focus on our specific circumstances and search for evidence in our own experiences.

The outside view: when you take into account a proper reference class/base rate.

Planning fallacy: plans and forecasts that are unrealistically close to best-case scenarios could be improved by consulting the statistics of similar cases

Reference class forecasting: the treatment for the planning fallacy

The forecasting method that Flyvbjerg applies is similar to the practices recommended for overcoming base-rate neglect:

Chapter 24: The Engine of Capitalism

Danger: losing track of reality and underestimating the role of luck, as well as the risk involved.

To try and mitigate the optimism bias, you should a) be aware of likely biases and planning fallacies that can affect those who are predisposed to optimism, and,

Indeed, we identified two reasons for this effect.

There were two ways of construing decisions i and ii:

Broad framing was obviously superior in this case. Indeed, it will be superior (or at least not inferior) in every case in which several decisions are to be contemplated together.

Decision makers who are prone to narrow framing construct a preference every time they face a risky choice. They would do better by having a risk policy that they routinely apply whenever a relevant problem arises. Familiar examples of risk policies are "always take the highest possible deductible when purchasing insurance" and "never buy extended warranties." A risk policy is a broad frame.

Miswanting: bad choices that arise from errors of affective forecasting; common example is the focusing illusion causing us overweight the effect of purchases on our future well-being.