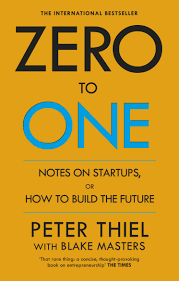 Zero to One by Peter Thiel: Summary & Notes

Thiel presents his rules for contrarian thinking and startups.

I consider this one of the most important books for startup founders, and while it might be a bit less actionable than something like the Lean Startup, it provides some deeper questions, principles, and methods of thinking about the business that will last much longer.

It’s one of those books that you will continually come back to for reference when you have questions during your journey as an entrepreneur.

“What important truth do very few people agree with you on?”

A good answer takes the following form: “Most people believe in x, but the truth is the opposite of x.”

"Positively defined, a startup is the largest group of people you can convince of a plan to build a different future."

“Even though sales is everywhere, most people underrate its importance.”

"Sales is the opposite: an orchestrated campaign to change surface appearances without changing the underlying reality.”

"Superior sales and distribution by itself can create a monopoly, even with no product differentiation. The converse is not true.”

"Most businesses get zero distribution channels to work: poor sales rather than bad product is the most common cause of failure. If you can get just one distribution channel to work, you have a great business. If you try for several but don’t nail one, you’re finished.”

"The most valuable businesses of coming decades will be built by entrepreneurs who seek to empower people rather than try to make them obsolete.”

“If humans and computers together could achieve dramatically better results than either could attain alone, what other valuable businesses could be built on this core principle?”

“...the seven questions that every business must answer:

Whatever your industry, any great business plan must address every one of them.”

"Above all, don’t overestimate your own power as an individual. Founders are important not because they are the only ones whose work has value, but rather because a great founder can bring out the best work from everybody at his company."

Preface: Zero to One

Doing what we already know how to do takes the world from 1 to n, adding more of something familiar. But every time we create something new, we go from 0 to 1.

The paradox of teaching entrepreneurship is that such a formula necessarily cannot exist; because every innovation is new and unique, no authority can prescribe in concrete terms how to be innovative.

Indeed, the single most powerful pattern I have noticed is that successful people find value in unexpected places, and they do this by thinking about business from first principles instead of formulas.

1. The Challenge of the Future

“What important truth do very few people agree with you on?”

Brilliant thinking is rare, but courage is in even shorter supply than genius.

A good answer takes the following form: “Most people believe in x, but the truth is the opposite of x.”

Horizontal or extensive progress means copying things that work— going from 1 to n.

My own answer to the contrarian question is that most people think the future of the world will be defined by globalization, but the truth is that technology matters more.

In the most dysfunctional organizations, signaling that work is being done becomes a better strategy for career advancement than actually doing work (if this describes your company, you should quit now).

Startups operate on the principle that you need to work with other people to get stuff done, but you also need to stay small enough so that you actually can.

Positively defined, a startup is the largest group of people you can convince of a plan to build a different future.

If you can identify a delusional popular belief, you can find what lies hidden behind it: the contrarian truth.

And yet the opposite principles are probably more correct:

Instead ask yourself: how much of what you know about business is shaped by mistaken reactions to past mistakes? The most contrarian thing of all is not to oppose the crowd but to think for yourself.

3. All Happy Companies Are Different

4. The Ideology of Competition

6. You Are Not a Lottery Ticket

Four social trends have conspired to root out belief in secrets.

“Thiel’s law”: a startup messed up at its foundation cannot be fixed.

ON THE BUS OR OFF THE BUS

CASH IS NOT KING

10. The Mechanics of Mafia

HOW TO SELL A PRODUCT

The Power Law of Distribution

Most cleantech companies crashed because they neglected one or more of the seven questions that every business must answer: