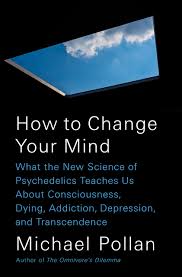 How to Change Your Mind by Michael Pollan: Summary & Notes

Related: A Place of My Own, Hamilton’s Pharmacopeia, The Tim Ferriss Show Podcast

A fascinating overview of the use and study of psychedelics.  Pollan covers everything from the LSD boom and research in the 50s and 60s, to anecdotal accounts of his own trials of psychedelics, to the neuroscience and current studies surrounding the drugs.

Great writing as usual from Pollan, and certainly an interesting subject.  It’s no secret that use of psychedelics has become more prominent in areas like tech circles and personal performance with the rise of things like micro-dosing.  This is the most comprehensive overview on the subject I’ve read.

For more information, check out some of the Tim Ferriss Podcast episodes with people like Peter Attia, Stan Grof, Paul Stamets and Hamilton Morris.  You can also check out the TV show Hamilton’s Pharmacopeia.

Chapter One - A Renaissance

Part I: The Promise

Your Brain on Psychedelics

Epilogue: In Praise of Neural Diversity