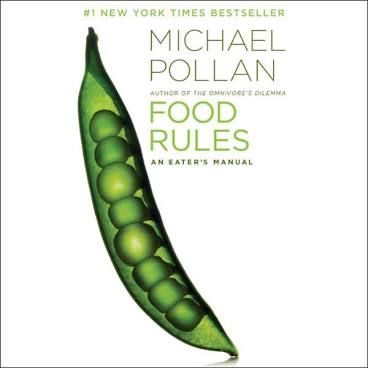 Related: In Defense of Food, The Omnivore's Dilemma

Michael Pollan (one of my favourite authors) distills food advice down to seven words: Eat food. Not too much. Mostly plants.

Most of the rest of this (short) book rephrases or clarifies this short points, giving brief, direct instructions for eating well.

Everyone should eat this way.

Eat food. Not too much. Mostly plants.

That's really all there is to it.

Eat local, healthy food that your great-grandmother would have recognized.

Buy from your local farmer's market.

PART I: What should I eat?

2: Don’t eat anything your great-grandmother wouldn’t recognize as food.

3: Avoid food products containing ingredients that no ordinary human would keep in the pantry.

5: Avoid foods that have some form of sugar (or sweetener) listed among the top three ingredients.

9: Avoid food products with the wordoid “lite" or the terms "low-fat" or “nonfat" in their names.

10: Avoid foods that are pretending to be something they are not.

12: Shop the peripheries of the supermarket and stay out of the middle.

13: Eat only foods that will eventually rot.

14: Eat foods made from ingredients that you can picture in their raw state or growing in nature.

15: Get out of the supermarket whenever you can.

16: Buy your snacks at the farmers’ market.

17: Eat only foods that have been cooked by humans.

18: Don’t ingest foods made in places where everyone is required to wear a surgical cap.

20: It’s not food if it arrived through the window of your car.

21: It’s not food if it’s called by the same name in every language. (Think Big Mac, Cheetos, or Pringles.)

PART II: What kind of food should I eat?

23: Treat meat as a flavoring or special occasion food.

27: Eat animals that have themselves eaten well.

33: Eat some foods that have been predigested by bacteria or fungi.

34: Sweeten and salt your food yourself.

35: Eat sweet foods as you find them in nature.

36: Don’t eat breakfast cereals that change the color of the milk.

38: Favor the kinds of oils and grains that have traditionally been stone-ground.

39: Eat all the junk food you want as long as you cook it yourself.

40: Be the kind of person who takes supplements—then skip the supplements.

41: Eat more like the French. Or the Japanese. Or the Italians. Or the Greeks.

42: Regard nontraditional foods with skepticism.

43: Have a glass of wine with dinner.

PART III: How should I eat?

50: The banquet is in the first bite.

51: Spend as much time enjoying the meal as it took to prepare it.

53: Serve a proper portion and don’t go back for seconds.

57: Don’t get your fuel from the same place your car does.

61: Leave something on your plate.

62: Plant a vegetable garden if you have the space, a window box if you don’t.