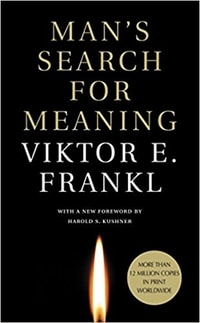 Often ranked among the most meaningful books for many, it’s fairly obvious why - the account of Frankl’s time in a concentration camp is both horrific and impossible to stop reading.

His own work in developing logo-therapy is interesting as a result; perhaps the most interesting learning is the flipping of the typical “finding life’s purpose” into recognizing that “each man is questioned by life”.

The book offers a prescription for finding one’s meaning in life, from someone who has seen the worst of it.  A short, worthwhile read.

I: EXPERIENCES IN A CONCENTRATION CAMP

II: LOGOTHERAPY IN A NUTSHELL

The Meaning of Life

The Essence of Existence

The Meaning of Love

The Meaning of Suffering

Logotherapy as a Technique

THE CASE FOR A TRAGIC OPTIMISM