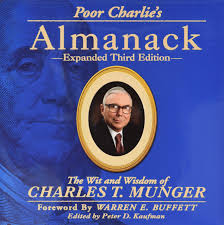 A book that has had a large impact on how I think and approach problems.  Formatted after Ben Franklin’s yearly publication of advice, Munger lays out all sorts of things, from clear investing principles, to an introduction to mental models and how more people should be thinking with interdisciplinary tools.

Particularly relevant for those interested in business and finance, but as he makes clear in many of his speeches (transcripts included in the book), it should be relevant for all, from lawyers to economists.  Highly recommend.

What to Look for in a Partner (Warren Buffett):

Incorporate an appropriate margin of safety

Independence - “Only in fairy tales are emperors told they are naked"

Develop into a lifelong self-learner through voracious reading; cultivate curiosity and strive to become a little wiser every day

Stay within a well-defined circle of competence

“Compound interest is the eighth wonder of the world” (Einstein); never interrupt it unnecessarily

Decisiveness - When proper circumstances present themselves, act with decisiveness and conviction

Recognize and adapt to the true nature of the world around you; don’t expect it to adapt to you

Finally: “prior to pulling the trigger” checklist

“I have three basic rules. Meeting all three is nearly impossible, but you should try anyway:

Antidote: train yourself to delay reaction

Antidote: learn how to ignore the examples from others when they are wrong.