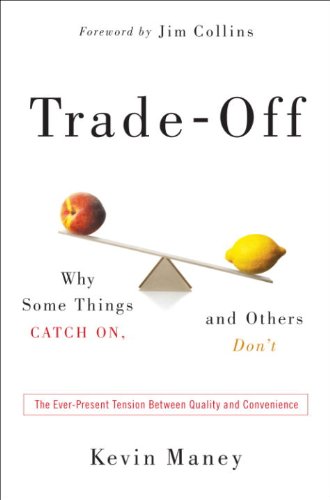 Related: Positioning: The Battle for Your Mind

I read this book as one of several that Moisey Uretsky from Digital Ocean recommended, and, like each one he suggested, it helped me think about the strategy and path for our startup at the time.

I think the fact that I read it while in the early stages of building a company made a huge difference for how relevant it was, and overall the book is focused on a relatively simple premise: those who have the courage to make rigorous choices between high-fidelity and high-convenience do better than those who make no clear and rigorous choices.

It's a relatively quick read, and lays out some of the details surrounding this theory, but it gives a good framework for thinking about where you are going to fit into a given market, and what you need to seek when developing a product roadmap.

To have a personal Hedgehog Concept means that you have constructed a path that meets three tests (the intersection of three circles):

There are five key concepts behind the fidelity swap:

Here are two significant additional factors to watch for: