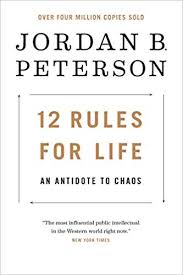 Related: The Subtle Art of Not Giving a F*ck, Principles

I really struggled to come up with a rating for this book.  Ultimately, the rating I gave it (6/10), is a reflection of the poor organization and flow of this book.  There is good information here, but I found the book unnecessarily bloated and cluttered.

The main problem I have with it is the poor flow.  This seems to be a result of a few things:

Overall, there are great sections, and a large amount of information in the book.  In my opinion, the organization just makes it far too difficult to actually absorb it.

RULE 1: STAND UP STRAIGHT WITH YOUR SHOULDERS BACK

RULE 2: TREAT YOURSELF LIKE SOMEONE YOU ARE RESPONSIBLE FOR HELPING

RULE 3: MAKE FRIENDS WITH PEOPLE WHO WANT THE BEST FOR YOU

RULE 4: COMPARE YOURSELF TO WHO YOU WERE YESTERDAY, NOT TO WHO SOMEONE ELSE IS TODAY

RULE 5: DO NOT LET YOUR CHILDREN DO ANYTHING THAT MAKES YOU DISLIKE THEM

RULE 6: SET YOUR HOUSE IN PERFECT ORDER BEFORE YOU CRITICIZE THE WORLD

RULE 7: PURSUE WHAT IS MEANINGFUL (NOT WHAT IS EXPEDIENT)

RULE 9: ASSUME THAT THE PERSON YOU ARE LISTENING TO MIGHT KNOW SOMETHING YOU DON’T

RULE 10: BE PRECISE IN YOUR SPEECH

RULE 11: DO NOT BOTHER CHILDREN WHEN THEY ARE SKATEBOARDING

RULE 12: PET A CAT WHEN YOU ENCOUNTER ONE ON THE STREET (DOGS ARE OK TOO)