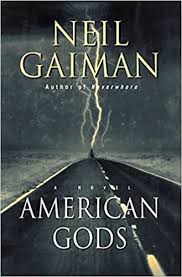 This novel focuses on Shadow, a newly-released convict who receives news his wife has been killed. He accepts a job on the way to his wife's funeral, which results in a series of undertakings which move back and forth between reality and fantasy.

The novel personifies modern and past religions and beliefs as physical beings, and in doing so raises questions about the nature of those beliefs and their validity.

I don't read much fantasy, and while I enjoy most books when I dabble, this one didn't particularly resonate with me. I enjoyed the underlying themes, but less so the novel itself.