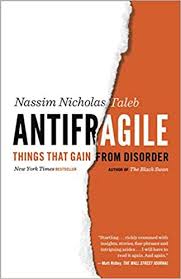 Related: The Black Swan, Skin in the Game

An excellent book that has influenced my thinking more than almost any other, and continues to be a reference I go back to. This book builds on The Black Swan.

Taleb puts forward evidence and definitions for fragility, robustness and antifragility, and explains where they apply in life, and why you want to strive for antifragility.  Great for improving contrarian thinking.

Book I - The Antifragile: An Introduction

Chapter 1: Between Damocles and Hydra

Chapter 3: The Cat and the Washing Machine

Chapter 4: What Kills Me Makes Others Stronger

Book II: Modernity and the Denial of Antifragility

Chapter 5: The Souk and the Office Building

Chapter 6: Tell Them I Love (Some) Randomness

Chapter 8: Prediction as a Child of Modernity

Book III: A Nonpredictive View of the World

Chapter 9: Fat Tony and the Fragilistas

Book IV: Optionality, Technology, and the Intelligence of Antifragility

How to Be Stupid

Chapter 13: Lecturing Birds on How to Fly

Chapter 14: When Two Things Are Not the "Same Thing”

Chapter 15: History Written by the Losers

Governments Should Spend on Nonteleological Tinkering, Not Research

To Fail Seven Times, Plus or Minus Two

Chapter 16: A Lesson in Disorder

Chapter 18: On the Difference Between a Large Stone and a Thousand Pebbles

A Simple Rule to Detect the Fragile

Chapter 19: The Philosopher’s Stone and Its Inverse

The Idea of Positive and Negative Model Error

How to Lose a Grandmother

How to Transform Gold into Mud: The Inverse Philosopher’s Stone

Where is the Charlatan?

To Age in Reverse: The Lindy Effect

What Does Not Make Sense

How to Medicate Half the Population

Chapter 22: To Live Long, but Not Too Long

Chapter 23: Skin in the Game: Antifragility and Optionality at the Expense of Others

The Problem of Frequency, or How to Lose Arguments

The Antifragility and Ethics of (Large) Corporations

Artisans, Marketing, and the Cheapest to Deliver

Chapter 24: Fitting Ethics to a Profession