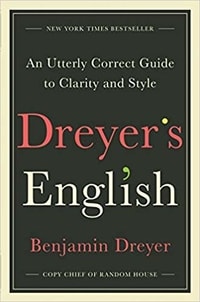 As entertaining as a deep book about words and grammar can be.

What I enjoyed most about this book is that it portrays language as a series of choices, a grayscale, rather than the typical black-and-white rules we are given. Dreyer does a great job discussing when and why some choices are made, and then suggesting a course. This context gives much better understanding than most grammar lessons.

Not for those who are casually interested in writing - read Stephen King’s On Writing instead. Excellent for those who seriously want to improve their understanding of English.

Part 1 – The Stuff in the Front

Chapter 1: The Life-Changing Magic of Tidying Up (Your Prose)

Here’s your first challenge: Go a week without writing

I’m sure there are many more secondary nonrules than these seven, but these are the ones I’m most often asked about (or challenged on), so:

2. The Passive Voice Is to Be Avoided.

5. “None” Is Singular and, Dammit, Only Singular.”

6. “Whether” Must Never Be Accompanied by “Or Not.”

Chapter 3: 67 Assorted Things to Do (and Not to Do) with Punctuation

32. The most basic use of semicolons is to divide the items in a list any of whose individual elements mandate a comma—in this case, Venice, Italy.

40. Use roman (straight up and down, that is, like the font this phrase is printed in) type encased in quotation marks for the titles of songs, poems, short stories, and episodes of TV series. Whereas the titles of music albums, volumes of poetry, full-length works of fiction and nonfiction, and TV series themselves are styled in aslant italics.”

53. Modern style is to merge prefixes and main words (nouns, verbs, adjectives) seamlessly and hyphenlessly, as in:

Chapter 6: A Little Grammar Is a Dangerous Thing

Chapter 7: The Realities of Fiction

The Real Reality of Fiction

The Basics of Good Storytelling

Many writers rely more heavily on pronouns than I’d suggest is useful. For me this sort of thing comes under the heading Remember that Writing Is Not Speaking. When we talk, we can usually make ourselves understood even amid a flood of vague “he”s and “she”s.

A brief, scarcely exhaustive list of other actions that wise writers might do well to put on permanent hiatus:

For fiction written in the past tense, here’s a technique for tackling flashbacks that I stumbled upon years ago, and writers I’ve shared it with have tended to get highly excited: Start off your flashback with, let’s say, two or three standard-issue “had”s (“Earlier that year, Jerome had visited his brother in Boston”), then clip one or two more “had”s to a discreet “ ’d” (“After an especially unpleasant dinner, he’d decided to return home right away”), then drop the past-perfecting altogether when no one’s apt to be paying attention and slip into the simple past (“He unlocked his front door, as he later recalled it, shortly after midnight”). Works like a charm.

Dialogue and Its Discontents

Part II: The Stuff in the Back

Chapter 8: Notes on, Amid a List of, Frequently and/or Easily Misspelled Words

FOR ALL INTENSIVE PURPOSES

REFERENCE (AS A VERB)

LAY, LIE, LAID, LAIN, AND THE REST OF THE CLAN

In either case, for those moments when you’re contemplating that either you or your prose could stand to go on a diet and your prose seems the easier target, here’s a good place to start. (The bits in italics are the bits you can dispose of.)

2. If you only see one movie this year…

4. Here’s a fun weird thing: The word “namesake” works in both directions. That is, if you were named after your grandfather, you are his namesake. He is also yours. Who knew.

11. Avoid misquoting. Einstein is only one of the pin-the-wisdom-on-the-maven targets. Five’ll get you ten that a quote you find attributed, particularly without reference to a published source, to Abraham Lincoln is inauthentic; the same goes for Mark Twain, Oscar Wilde (and with the thousands of witticisms Wilde uttered, why would anyone put words into his mouth?), Winston Churchill, or Dorothy Parker (like Wilde, an industrial-strength generator of cleverness).

12. Title case is the convention of capitalizing, in titles of works (books, book chapters, plays, movies—you get the idea) and, often though not always, in newspaper and magazine headlines, the first letter of all the important words.

14. A button-down shirt is a shirt whose collar points fasten to buttons on the upper-chestal zone of the shirt. It is not any old shirt that buttons from neck to waist. Call that a dress shirt, if it happens to be one (there’s no need, by the way, ever to refer to something as a “long-sleeve dress shirt,” because there is no such thing as a “short-sleeve dress shirt”), or a button-front shirt, or a button-up shirt, I don’t really care.