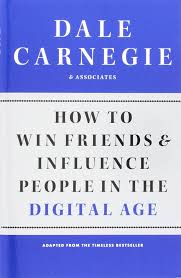 How to Win Friends & Influence People in the Digital Age by Dale Carnegie & Associates: Summary & Notes

This book is a revamped version of the original principles from How to Win Friends & Influence People, reinvigorated with examples from the modern world, and readers that are applying the principles in modern times.

I was originally skeptical of the principles in the original book, calling them “common sense”. Having a deeper understanding of some of the subtleties of negotiation and working in a team environment at work have given me a new appreciation for them.

They are simple, but powerful, and we should all try and remind ourselves of them regularly.

1: Take Interest in Others’ Interests

5: Discuss What Matters to Them

6: Leave Others a Little Better

Part 3 - How to Merit and Maintain Others’ Trust

4: Begin in a Friendly Way

10: Throw Down a Challenge

Part 4 - How to Lead Change Without Resistance or Resentment

1: Begin on a Positive Note

7: Give Others a Fine Reputation to Live Up To