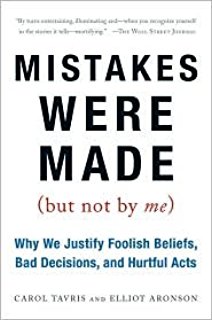 Mistakes Were Made (but Not by Me) by Carol Tavris & Elliot Aronson: Summary & Notes

This book is an introduction to self-justification and cognitive dissonance, and by extension, cognitive biases.  It’s a great overview of everyday situations and historical examples where these play a role in everything from learning to our relationships.

Overall a great book that has led me to examining in more detail the cognitive biases we all are subject to, and even further to mental models which help thinking.  Would definitely recommend reading.

Cognitive Dissonance: The Engine of Self-justification

The Pyramid of Choice

Pride and Prejudice ... and Other Blind Spots

The Gift That Keeps on Giving

A Slip of the Brain

The Biases of Memory

The Problem of the Benevolent Dolphin

Letting Go and Owning Up