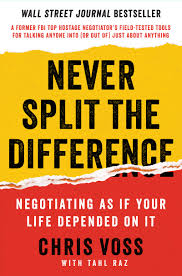 Great book about how to negotiate, an oft-overlooked skill that can be applied everywhere in your life.

I identified negotiation skills as a personal weakness, and I was able to immediately improve by applying strategies and tactics from this book.

Recommended for anyone who wants to be able to communicate more effectively, let alone negotiate better.

How to Disagree Without Being Disagreeable

The intention behind mirroring should be “Please, help me understand."

Oprah is one of the great practitioners of these skills.

Once you’ve spotted an emotion you want to highlight, the next step is to label it aloud. Labels can be phrased as statements or questions. The only difference is whether you end the sentence with a downward or upward inflection. But no matter how they end, labels almost always begin with roughly the same words:

The last rule of labeling is silence. Once you’ve thrown out a label, be quiet and listen.

Neutralize the Negative, Reinforce the Positive

Do An Accusation Audit

“No" Starts the Negotiation

“No" is the start of the negotiation, not the end of it. We’ve been conditioned to fear the word “No." But it is a statement of perception far more often than of fact. It seldom means, "I have considered all the facts and made a rational choice." Instead, “No" is often a decision, frequently temporary, to maintain the status quo. Change is scary, and “No" provides a little protection from that scariness.

This means you have to train yourself to hear “No" as something other than rejection, and respond accordingly. When someone tells you “No," you need to rethink the word in one of its alternative—and much more real—meanings:

People have a need to say, “No." So don’t just hope to hear it at some point; get them to say it early.

Chapter 5 - Trigger the Two Words That Immediately Transform Any Negotiation

The F-Word: Why It’s So Powerful, When to Use It, and How

2. Let the Other Guy Go First…Most of the Time

5. When You Do Talk Numbers, Use Odd Ones

6. Surprise With a Gift

How to Negotiate a Better Salary

Spark Their Interest in Your Success and Gain an Unofficial Mentor

Chapter 7 - Create the Illusion of Control

Here are some other great standbys that I use in almost every negotiation, depending on the situation:

Avoid becoming emotional: Bite your tongue. When you’re attacked in a negotiation, pause and avoid angry emotional reactions. Instead, ask your counterpart a calibrated question.

“Yes” is Nothing Without “How"

The Rule of Three

Pay Attention to Their Usage of Pronouns

How to Get Your Counterparts to Bid Against Themselves

The first step in the “No" series is the old standby:

After that, some version of "Your offer is very generous, I’m sorry, that just doesn’t work for me" is an elegant second way to say “No."

Then you can use something like "I’m sorry but I’m afraid I just can’t do that." It’s a little more direct, and the "can’t do that" does great double duty. By expressing an inability to perform, it can trigger the other side’s empathy toward you.

"I’m sorry, no" is a slightly more succinct version for the fourth “No." If delivered gently, it barely sounds negative at all.

If you have to go further, of course, “No" is the last and most direct way. Verbally, it should be delivered with a downward inflection and a tone of regard; it’s not meant to be "NO!"

There’s a critical lesson there: The art of closing a deal is staying focused to the very end. There are crucial points at the finale when you must draw on your mental discipline. Don’t think about what time the last flight leaves, or what it would be like to get home early and play golf. Do not let your mind wander. Remain focused.