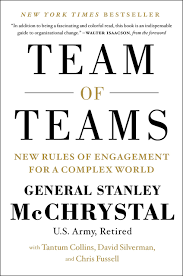 A look at the changes required for modern organizations to succeed in terms of how they are structured and managed.

The story is told through the lens of McChrystal's command of JSOC (Joint Special Operations Command) in the early/mid 2000s, and many of the lessons are drawn from that experience.

This is the result of two factors:

As a result, the world has become much more complex (in many different areas), and impossible to predict.

Yeah We can quantify our predictions and whether things are complex by attaching a time frame.

This can be improved by doing two things:

Leadership is most powerful by example:

Part I - The Proteus Problem

Chapter 3: From Complicated to Complex

Part II - From Many, One

Chapter 5: From Command to Team

"Get a Swim Buddy"

"The Believer Will Put His Life on the Line"

"The Point at Which Everyone Else Sucks"

Chapter 8: Brains Out of the Footlocker

"Use Good Judgment In All Situations"

A World Without Stop Signs