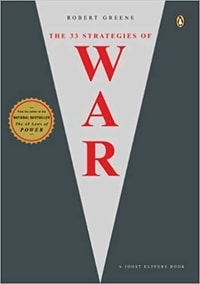 The 33 Strategies of War by Robert Greene: Summary & Notes

Related: The 50th Law, The Art of Seduction, Mastery, 48 Laws of Power

Sometimes it’s harder to jump from war strategies to life, but it’s possible nonetheless. The book gives an overview of major war strategies, and how they can be applied to life.

I enjoyed the format of the book - strategy followed by historical examples - just like I enjoy Robert Greene’s other books.

I would read 48 Laws of Power and Mastery first, but this is another insightful, thorough book by Greene.

Declare War on Your Enemies: The Polarity Strategy

Do Not Fight the Last War: The Guerrilla-War-of-the-Mind Strategy

Amidst the Turmoil of Events, Do Not Lose Your Presence of Mind: The Counterbalance Strategy

Create a Sense of Urgency and Desperation: The Death-Ground Strategy

Avoid the Snares of GroupThink: The Command-and-Control Strategy

Segment Your Forces: The Controlled-Chaos Strategy

Transform Your War into a Crusade: Morale Strategies

The Art of Man Management

Turn the Tables: The Counterattack Strategy

Know Your Enemy: The Intelligence Strategy

Overwhelm Resistance with Speed and Suddenness: The Blitzkrieg Strategy

The Art of Ultimate Control

Hit Them Where it Hurts: The Center-of-Gravity Strategy

Defeat Them in Detail: The Divide-and-Conquer Strategy

Expose and Attack Your Opponent’s Soft Flank: The Turning Strategy

Envelop the Enemy: The Annihilation Strategy

Maneuver Them Into Weakness: The Ripening-for-the-Sickle Strategy

Negotiate While Advancing: The Diplomatic-War Strategy

Know How to End Things: The Exit Strategy

Weave a Seamless Blend of Fact and Fiction: Misperception Strategies

Take the Line of Least Expectation: The Ordinary-Extraordinary Strategy

Deny Them Targets: The Strategy of the Void

Seem to Work for the Interests of Others While Furthering Your Own: The Alliance Strategy

Give Your Rivals Enough Rope to Hang Themselves: The One-Upmanship Strategy

The Art of One-Upmanship

Destroy from Within: The Inner-Front Strategy

Dominate While Seeming to Submit: The Passive-Aggression Strategy

Sow Uncertainty and Panic Through Acts of Terror: The Chain-Reaction Strategy