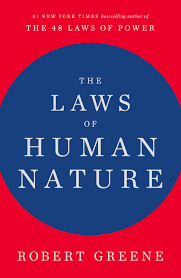 The Laws of Human Nature by Robert Greene: Summary & Notes

Related: The 50th Law, The Art of Seduction, Mastery, 48 Laws of Power

This book is just as full of life knowledge as his others, and even easier to apply to real life.

I didn’t like this book on initial read as much as Greene’s other books (and he’s one of my favourite authors). It is dense and will be long to get through initially, but it will be worth it.

Full of lessons on psychology and strategy that will help you in work, relationships and life.

1: Master Your Emotional Self - The Law of Irrationality

Step One: Recognize the Biases

Step Three: Strategies Toward Bringing Out the Rational Self

2: Transform Self-Love Into Empathy - The Law of Narcissism

3: See Through People’s Masks - The Law of Role-Playing

The Art of Impression Management

4: Determine the Strength of People’s Character - The Law of Compulsive Behavior

In general, you must learn to identify toxic character, and to not get involved or disengage as quickly as possible.

5: Become an Elusive Object of Desire - The Law of Covetousness

The Object of Desire

Know how and when to withdraw.

6: Elevate Your Perspective - The Law of Shortsightedness

Four Signs of Shortsightedness and Strategies to Overcome Them

7: Soften People’s Resistance by Confirming Their Self-Opinion - The Law of Defensiveness

1. Transform yourself into a deep listener.

2. Infect people with the proper mood.

5. Use people’s resistance and stubbornness.

8: Change Your Circumstances by Changing Your Attitude - The Law of Self-Sabotage

How to view the world:

How to view adversity:

How to view yourself:

How to view your energy and health:

How to view other people:

9: Confront Your Dark Side - The Law of Repression

The following are some of the most notable signs of such release.

The following are seven of the most emphatic traits that you must learn to recognize and manage appropriately:

The Tough Guy: He projects a rough masculinity that is intended to intimidate.

The Saint: These people are paragons of goodness and purity. They support the best and most progressive causes.

The Passive-Aggressive Charmer: These types are amazingly nice and accommodating when you first meet them, so much so that you tend to let them into your life rather quickly.

The Fanatic: You are impressed by their fervour, in support of whatever cause.

The Rigid Rationalist: All of us have irrational tendencies.

The Snob: These types have a tremendous need to be different from others, to assert some form of superiority over the mass of mankind.

The Extreme Entrepreneur: At first glance these types seem to possess very positive qualities, especially for work. They maintain very high standards and pay exceptional attention to detail. They are willing to do much of the work themselves. If mixed with talent, this often leads to success early on in life.

The following are four clear and practical steps for achieving this.

10: Beware the Fragile Ego - The Law of Envy

You want to look for combinations or repetitions of the following signs, a pattern, before moving to alert mode.

The push and pull.

The following are five common varieties of enviers, how they tend to disguise themselves, and their particular forms of attack.

The following are five simple exercises to help you in achieving this.

Move closer to what you envy.

11: Know Your Limits - The Law of Grandiosity

The following are six common illusions they like to create.

I rewrite the rules.

I have the golden touch.

The problem is not with the energy itself, which can be used to fuel our ambitions, but with the direction it takes.

Although the precise way to channel the energy will depend on your field and skill level, the following are five basic principles that are essential for attaining the high level of fulfillment that can come from this reality-based form of grandiosity.

Maintain a dialogue with reality.

12: Reconnect to the Masculine or Feminine Within You - The Law of Gender Rigidity

Below you will find six of the more common types of gender projections. You must use this knowledge in three ways: First, you must recognize in yourself any tendency toward one of these forms of projection. This will help you understand something profound about your earliest years and make it much easier for you to withdraw your projections on other people.

Second, you must use this as an invaluable tool for gaining access to the unconscious of other people, to seeing their anima and animus in action.

And finally, you must be attentive to how others will project onto you their needs and fantasies.

The Devilish Romantic: For the woman in this scenario, the man who fascinates her—often older and successful—might seem like a rake, the type who cannot help but chase after young women. But he is also romantic.

The Elusive Woman of Perfection: He thinks he has found the ideal woman. She will give him what he’s been missing in his prior relationships, whether that’s some wildness, some comfort and compassion, or a creative spark.

The Lovable Rebel: For the woman who is drawn to this type, the man who intrigues her has a noticeable disdain for authority. He is a nonconformist.

The Fallen Woman: To the man in question, the woman who fascinates him seems so different from those he has known. Perhaps she comes from a different culture or social class.

The Superior Man: He seems brilliant, skilled, strong, and stable. He radiates confidence and power. He could be a high-powered businessman, a professor, an artist, a guru.

The Woman to Worship Him: He’s driven and ambitious, but his life is hard. It’s a harsh, unforgiving world out there, and it’s not easy to find any comfort. He feels something missing in his life. Then along comes a woman who is attentive to him, warm, and engaging. She seems to admire him. He feels overwhelmingly drawn to her and her energy.

Masculine and feminine styles of thinking:

Masculine and feminine styles of action:

Masculine and feminine styles of self-assessment and learning:

Masculine and feminine styles of relating to people and leadership:

13: Advance with a Sense of Purpose - The Law of Aimlessness

Strategies for Developing a High Sense of Purpose

Discover your calling in life.

Use resistance and negative spurs.

Create a ladder of descending goals.

Lose yourself in the work.

The Lure of False Purposes

Here are five of the most common forms of false purposes that have appealed to humans since the beginning of civilization.

The pursuit of pleasure.

14: Resist the Downward Pull of the Group - The Law of Conformity

An Experiment in Human Nature

The desire to fit in.

The need to perform.

The Court and Its Courtiers

The following are sever of the more common types you will find.

The Intriguer: These individuals can be particularly difficult to recognize. They seem intensely loyal to the boss and to the group. No one works harder or is more ruthlessly efficient.

The Stirrer: This type is generally riddled with insecurities but adept at disguising them from those in the court.

The Gatekeeper: The goal of the game for these types is gaining exclusive access to leaders, monopolizing the flow of information to them.

The Shadow Enabler: These people enable others (usually leaders) to act on their Shadow impulses. They often serve as the fall guy if what they advocated, or acted on, becomes public. Maintain a polite distance.

The Mirrorer: These types are often among the most successful courtiers of all, because they are capable of playing the double game to the hilt—they are adept at charming leaders and fellow courtiers, maintaining a broad base of support.

The Favorite and the Punching Bag: These two types occupy the highest and lowest rungs of the court.

The following are five key strategies for achieving this, all of which should be put into practice.

Instill a collective sense of purpose.

Assemble the right team of lieutenants.

Infect the group with productive emotions.

15: Make Them Want to Follow You - The Law of Fickleness

Cultivate the third eye: the Vision.

Lead from the front: the Tone.

Never appear to take, always to give: the Taboo.

16: See the Hostility Behind the Friendly Façade - The Law of Aggression

The Source of Human Aggression

Passive Aggression–Its Strategies and How to Counter Them

The following are the most common strategies employed by such aggressors, and ways to counter them.

The following are four potentially positive elements of this energy that we can discipline and use, improving what evolution has bestowed on us.

17: Seize the Historical Moment - The Law of Generational Myopia

Strategies for Exploiting the Spirit of the Times

Push against the past.

Adapt the past to the present spirit.

Resurrect the spirit of childhood.

The Human Beyond Time and Death

The phases of life:

18: Meditate on Our Common Mortality - The Law of Death Denial

The Bullet in the Side

A Philosophy of Life Through Death

The following are five key strategies, with appropriate exercises, to help us achieve this.

Awaken to the shortness of life.

See the mortality in everyone.

Embrace all pain and adversity.

Open the mind to the Sublime.