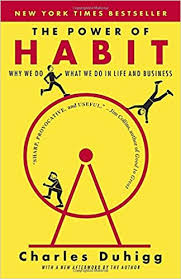 The Power of Habit by Charles Duhigg: Summary & Notes

Until reading James Clear’s Atomic Habits, this was the best book on habit formation (and breaking) I had read.

Duhigg clearly describes the research behind habit formation, as well as breaking down habits into clear parts. He then uses this to teach how we can successfully form new habits by substituting components.

No doubt some of these ideas informed James’s book as well.

I would read Atomic Habits first, but if you want another perspective, you’ll gain valuable insight from this book as well.

Chapter 2: The Craving Brain: How to Create New Habits

Chapter 3: The Golden Rule of Habit Change: Why Transformation Occurs

Chapter 4: Keystone Habits, or the Ballad of Paul O’Neill: Which Habits Matter Most

Chapter 5: Starbucks and the Habit of Success: When Willpower Becomes Automatic

Chapter 7: How Target Knows what you want before you do: When Companies Predict (and Manipulate) Habits

Chapter 9: The Neurology of Free Will: Are We Responsible for Our Habits?

Appendix: A Reader’s Guide to Using These Ideas

The point is to test different hypotheses to determine which craving is driving your routine.

To identify a cue amid the noise, we can use the same system as the psychologist: Identify categories of behaviours ahead of time to scrutinize in order to see patterns. Luckily, science offers some help in this regard. Experiments have shown that almost all habitual cues fit into one of five categories:

So if you’re trying to figure out the cue for the “going to the cafeteria and buying a chocolate chip cookie” habit, you write down five things the moment the urge hits (these are actual notes from when I was trying to diagnose my habit):

Put another way, a habit is a formula our brain automatically follows: when I see CUE, I will do ROUTINE in order to get a REWARD.

To re-engineer that formula, we need to begin making choices again. And the easiest way to do this, according to study after study, is to have a plan. Within psychology, these plans are known as “implementation intentions”.