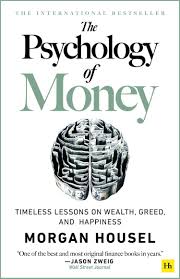 The Psychology of Money by Morgan Housel: Summary & Notes

Related: I Will Teach You To Be Rich

The most valuable part of this book is that it explicitly links personal finance with psychology.

Saving, investment strategies, decision-making—these have all been known as key parts of personal finance, but the psychological side is rarely explored, and that's what this book is about.

Reading this plus another book on the operational side of personal finance—I Will Teach You To Be Rich, for example—will put you ahead of 99% of the population on managing your money.

Introduction: The Greatest Show On Earth

1. The hardest financial skill is getting the goalpost to stop moving.

2. Social comparison is the problem here.

4. There are many things never worth risking, no matter the potential gain

1. More than I want big returns, I want to be financially unbreakable. And if I’m unbreakable I actually think I’ll get the biggest returns, because I’ll be able to stick around long enough for compounding to work wonders.

2. Planning is important, but the most important part of every plan is to plan on the plan not going according to plan.

3. A barbelled personality—optimistic about the future, but paranoid about what will prevent you from getting to the future—is vital.

The most powerful common denominator of happiness was simple. Campbell summed it up:

8. Man in the Car Paradox

9. Wealth is What You Don't See

2. History can be a misleading guide to the future of the economy and stock market because it doesn’t account for structural changes that are relevant to today’s world.

17. The Seduction of Pessimism

18. When You'll Believe Anything

1. The more you want something to be true, the more likely you are to believe a story that overestimates the odds of it being true.

2. Everyone has an incomplete view of the world. But we form a complete narrative to fill in the gaps.

Kahneman once laid out the path these stories take:

Postscript: A Brief History of Why the U.S. Consumer Thinks the Way They Do