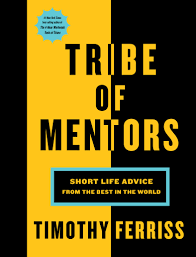 The format of this book is similar to Tools of Titans, but with even less detailed sections, for the most part.  This is no doubt partially due to the fact that Tim asked each person the same 11 questions, rather than having longer, in-depth conversations.

The 11 questions asked were:

I liked this book, though I didn’t find it as useful as Tools of Titans, and it’s not really comparable to the 4H series of books.

That said, it’s a good book to pick up and read a few interviews when you’re looking for some motivation or having trouble with a big question, and there are some trends that can be extracted.

The largest takeaways I noticed were, in no particular order:

Tim’s conclusion was also one of my favourite parts of the book:

THE DANGER OF BIG QUESTIONS