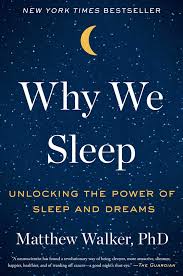 Why We Sleep by Matthew Walker: Summary & Notes

Related: Atomic Habits, How to Change Your Mind

The most comprehensive and compelling book on sleep I have ever read.

I am becoming convinced (aided by this book) that being able to sleep well is a huge advantage in life. This book is likely to convince you of the same.

It is a summary of scientific research on sleep to date, providing insight on how sleep affects cognitive and physical performance in both the short and long term, and what you can do improve your own sleep (which often involves avoiding things causing bad sleep).

Recommended for everyone, as sleep affects us all.

Chapter 4 - Ape Beds, Dinosaurs, and Napping with Half a Brain

How Should We Sleep?

Chapter 5 - Changes in Sleep Across the Life Span

Sleep in Midlife and Old Age

Part 2 - Why Should You Sleep?

Chapter 6 - Your Mother and Shakespeare Knew

The Benefits of Sleep for the Brain

Sleep for Other Types of Memory

Chapter 7 - Too Extreme for the Guinness Book of World Records

Sleep Deprivation and the Body

Sleep Loss and the Cardiovascular System

Sleep Loss and the Reproductive System

Sleep Loss and the Immune System

Chapter 12 - Things That Go Bump in the Night

Sleep Disorders and Death Caused by No Sleep

What’s Stopping You from Sleeping?

Turning Down the Nightcap - Alcohol

Get the Nighttime Chills

Chapter 14 - Hurting and Helping Your Sleep

Should You Take Two of These Before Bed?

Don’t Take Two of These, Instead Try These

Chapter 15 - Sleep and Society: What Medicine and Education Are Doing Wrong; What Google and NASA Are Doing Right