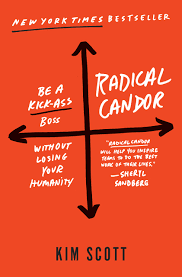 A must-read for managers. This is one of those books so packed with information that you'll continue to revisit it like a textbook.

Not as relevant for me since I don't do much management (and am less interested in it), hence the 7, but a 10 for professional managers.

Part I - A New Management Philosophy

What Radical Candor is Not

2 - Get, Give, and Encourage Guidance

3 - Understand What Motivates Each Person on Your Team

Understanding What Matters and Why

The Problem With “Passion"

Create a culture of listening

Create an obligation to dissent

Keep the "dirt under your fingernails"

Pressure to be consistent

Figure out your "recipe" to stay centered and stick to it.

Recognizing your own emotions

Master your reactions to others’ emotions

Here are some tips/techniques I've seen work to get the conversation flowing:

Here are some techniques I've found helpful to make sure I'm being humble when giving praise and criticism:

In person (if possible)

Praise in public, criticize in private

HIRING: YOUR MENTALITY AND YOUR PROCESS

Here are some simple things you can do to make sure you’re hiring the right people:

Encourage new ideas in the 1:1.

Here are some questions that you can use to nurture new ideas by pushing people to be clearer:

Signs you’ll get from 1:1s that you’re failing as a boss