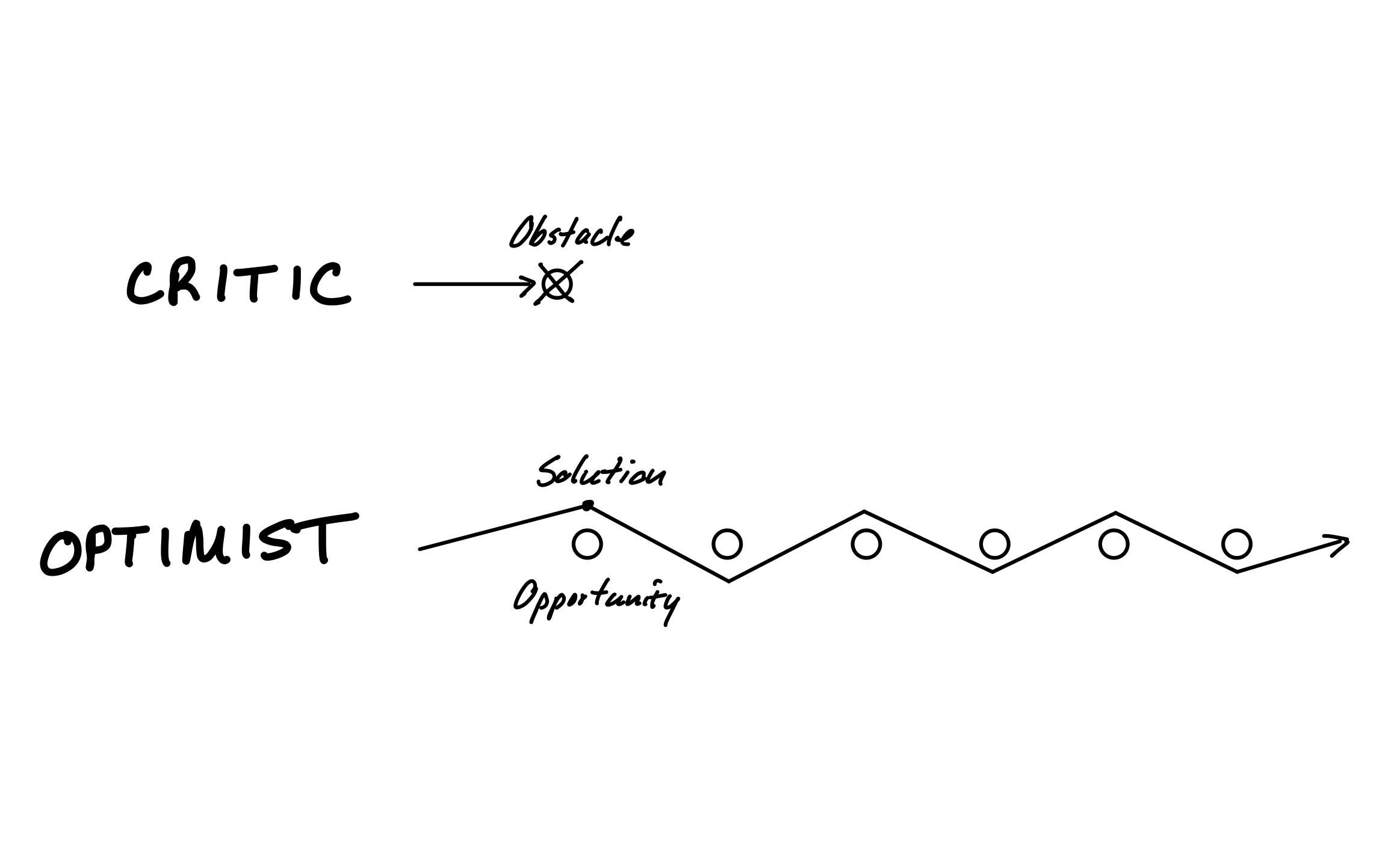 It's easy to criticize:

But it has little value.

Some people say: "Of course it's valuable! Finding problems is how you solve them in the first place!"

Who would you rather work with?

The person who constantly points out problems?

Whenever you come up with an idea, they give you five reasons it won't work. When you try something, and it goes wrong, they say "I told you so."

Or the eternal optimist?

Of course it's the second person. And we all know who those people are. Just think about who you're excited to share ideas with: those are optimists. The people you don't bother sharing with are not.

Criticism is valuable. But people don't hear criticism unless they're looking for it. Even then it's tough.

Online, people seem to think that if someone has shared their thoughts, that they're looking for criticism.

Most of the time they aren't.

Facebook groups are cesspools of inflammatory ideas and petty arguments.

"Dunking" has become commonplace on Twitter, where people take joy in putting others down and making their ideas and thoughts look stupid.

Do they deserve it sometimes? Sure. But why would you give them the attention?

I no longer have time for unwarranted criticism, dunking, or pointing out why something won't work. It annoys me as much as jargon. I don't like being annoyed, so I aim to ignore both.

None of this is to say that I'm not guilty of it. I've become more aware because the criticism has been levelled at me in the past.

Often, I think it's a reaction to an unfamiliar situation.

When you start a new job, you aren't familiar enough with the resources and people involved to suggest a solution. So you revert to pointing out potential problems.

It also takes confidence and experience to think through possible courses of action and come up with a suggestion for a solution.

It also takes work to be quiet and listen. But it's work worth doing.

Criticism has its place too.

When people are seeking feedback explicitly, it's fine to offer it. At least they're willing to listen. But even then, it's probably sub-optimal.

Even better is asking pointed questions and letting the other person find a solution. It's much harder. But when you can create that moment for them, where they see the solution themselves, it's much, much more powerful.

We all have a choice.

We can be the type of person that criticizes the efforts of others, who points out the potential flaws, and shoots down ideas.

Or you can be like Packy McCormick of Not Boring, and explicitly make the choice to be an optimist:

"The only things I’m not optimistic about are cynics and “well, actually…” people. It’s easy to dunk. It’s easy to look smart saying why things aren’t going to work. But those people are not our people.

Not Boring is for the optimists, and for the people trying to make crazy things happen. I’m definitely going to be biased. I’m going to have the backs of the companies in which we invest, and the companies that support Not Boring."

Gathering like-minded people is an effort in saying what you believe in, and then working to demonstrate those beliefs with your actions.

I'm not perfect, and I'm sure I'll make mistakes.

But I'm an optimist, and I'm going to continue to strive to be someone who looks for solutions, not problems.

Those are my kind of people.