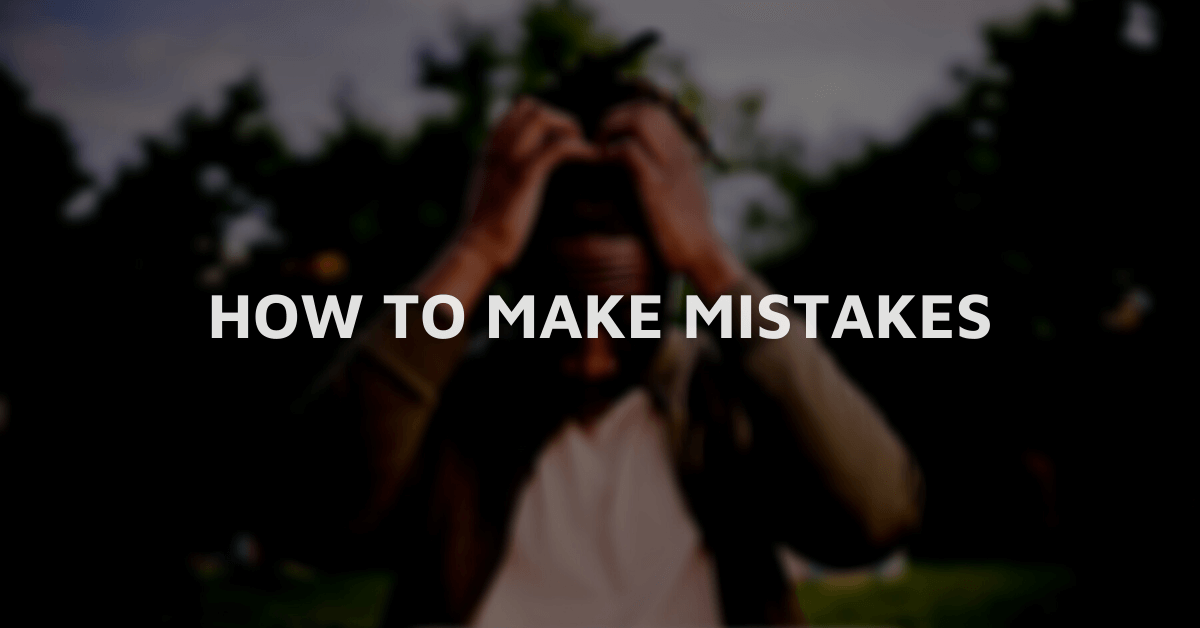 How to Make Mistakes

It happens to all of us. We make a mistake and we think about how it could have been prevented. We think about who will be disappointed, and the consequences.

We feel shame, disappointed with ourselves, angry, and then sorry for ourselves. Repeatedly.

The thing is, mistakes are unavoidable. We're all going to make them. And they will be even more frequent when we try to do hard things, or important things, or new things.

Making mistakes well is how we learn and how we improve.

"...you’ve got one chance here to do amazing things, and being afraid of being wrong or making a mistake or fumbling is just not how you do something of impact."—Adam Gazzaley in Tools of Titans by Tim Ferriss

Why Do Mistakes Suck So Much?

For those of us who grew up in the West—in North America in particular—we learn from a young age that making mistakes has a cost.

If you did well in school—like many high performers—you learned that there was a cost for being too eager to learn or making mistakes.

Offer answers, participate, and show your desire to learn, and you'd be ridiculed by classmates.

Offer an answer and be wrong, and you'd be ridiculed even more, as the "smart kid" who messed up.

You see top performers become quieter and participate less as they move through school. They learn it's better just to do the work than risk ridicule.

Ray Dalio speaks about the dangers of this in Principles:

I believe that our society's “mistakephobia" is crippling, a problem that begins in most elementary schools, where we learn to learn what we are taught rather than to form our own goals and to figure out how to achieve them. We are fed with facts and tested and those who make the fewest mistakes are considered to be the smart ones, so we learn that it is embarrassing to not know and to make mistakes.

As he mentions, we learn to avoid mistakes during schooling, and it costs us when we move into the real world:

Good school learners are often bad mistake-based learners because they are bothered by their mistakes. I particularly see this problem in recent graduates from the best colleges, who frequently shy away from exploring their own weaknesses.

We learn in school that making mistakes is embarrassing, and so we avoid them at all costs.

This continues in society, at least in North America, as Carol Tavris points out in Mistakes Were Made (but Not by Me):

America is a mistake-phobic culture, one that links mistakes with incompetence and stupidity. So even when people are aware of having made a mistake, they are often reluctant to admit it, even to themselves, because they take it as evidence that they are a blithering idiot.

So our schooling and our society teach us that mistakes are bad and embarrassing, and that we will get made fun of for them. They teach us to hide mistakes or avoid making them in the first place.

Why is that bad?

Why Avoiding Mistakes is Bad

Mistakes happen, no matter what.

Avoiding them is bad for a number of reasons: we learn slower, we get misled, we fail to see reality, and if we are successful at avoiding all mistakes, we don't learn.

Ray Dalio says as much, again in Principles:

I met a number of great people and learned that none of them were born great—they all made lots of mistakes and had lots weaknesses—and that great people become great by looking at their mistakes and weaknesses and figuring out how to get around them.

‍In short, I learned that being totally truthful, especially about mistakes and weaknesses, led to a rapid rate of improvement and movement toward what I wanted.

Our unwillingness to make mistakes, or to acknowledge them when they happen, hinders our ability to learn, and therefore our ability to be successful.

"...intelligent people who are open to recognizing and learning from their weaknesses substantially outperform people with the same abilities who aren’t similarly open."—Ray Dalio, Principles

How Our Brains Make the Problem Worse

School and society teaches us that making mistakes is bad. So we avoid them.

But it turns out our own brains are already wired to make acknowledging mistakes difficult.

The culprit is cognitive dissonance:

Cognitive dissonance is a state of tension that occurs whenever a person holds two cognitions (ideas, attitudes, beliefs, opinions) that are psychologically inconsistent.

Dissonance reduction operates like a thermostat, keeping our self-esteem bubbling along on high. That is why we are usually oblivious to the self-justifications, the little lies to ourselves that prevent us from even acknowledging that we made mistakes or foolish decisions.—Carol Tavris, Mistakes Were Made (But Not by Me)

Even if we acknowledge that a mistake was made, cognitive dissonance seeks to prevent us from acknowledging our role: "That wasn't my fault" or "This was caused by X, Y and Z, and they couldn't have been predicted."

We see it with forecasting all the time. A prediction is made, it turns out to be wrong, and the predictor says "Well of course, factor X and Y couldn't have been known ahead of time."

Of course! But they still made the prediction and got it wrong. Their cognitive dissonance is just telling them it's not their fault.

"False memories allow us to forgive ourselves and justify our mistakes, but sometimes at a high price: an inability to take responsibility for our lives."—Mistakes Were Made (But Not by Me)

How to Make Mistakes Well

To make mistakes well, we need to do two things: own up and learn.

The first step is admitting we've made a mistake.

People often worry more about appearing to not have problems than about achieving their desired results, and therefore avoid recognizing that their own mistakes and/or weaknesses are causing the problems.

More than anything else, what differentiates people who live up to their potential from those who don’t is a willingness to look at themselves and others objectively.

If we can't recognize that we made a mistake, we can't own up and learn.

Recognizing we made a mistake and owning up are two parts of the same process.

If we've made a mistake, usually someone will tell us, or we'll notice someone is angry or upset. These are cues that we've done something wrong.

Once you've notice these cues, the best mental trick I've found for owning up is Extreme Ownership (from the book of the same name).

Extreme Ownership is a leadership philosophy publicized by former Navy SEAL Jocko Willink that says this: if you were involved, as a leader, you are responsible.

Leaders must own everything in their world. There is no one else to blame.

If someone isn’t doing what you want or need them to do, look in the mirror first and determine what you can do to better enable this.

It's a shortcut for your brain. If something goes wrong and a mistake gets made, instead of thinking about assigning blame, you skip that step and take responsibility. "I own this."

The reason this works is that it's an absolute rule. If you were involved at all, you are responsible.

You skip the blaming part, and go straight to the solution.

There is another important part of making a mistake well: dealing with those affected by the mistake.

When you make mistakes, the other people involved will expect a reaction from you.

The strategy I like here comes from It Doesn't Have to Be Crazy at Work, and it comes via the former head of Apple France, Jean-Louis Gasée:

So, when you make a mistake:

The final step, once the situation is remedied, is to stand back and judge the situation objectively. At this point, you can ask "How much was I to blame?"

Because you've already accepted responsibility, and done what's required to fix the situation, you have a clearer view.

At this point, it's probably a good idea to revisit some general principles that may apply, things like:

Make Mistakes Well, and Your Life Will Change

To get past it we need to:

‍"Be grateful for being wrong. You get to learn."

But mistakes are critical for learning and improving.

Make mistakes well, and your learning will accelerate past those around you.

Mistakes can compound your learning.

Take advantage of it.