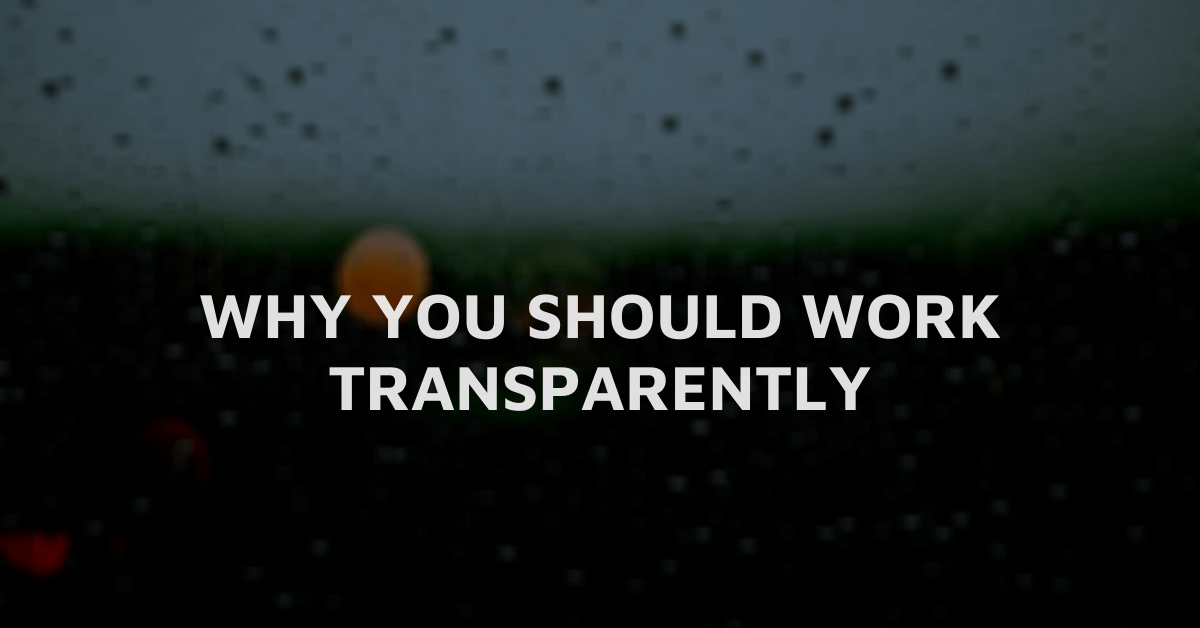 Why You Should Work Transparently

Working transparently is a foreign concept for many of us.

School teaches us to work and polish our final product alone. Tests ensure we can get the final answers by ourselves.

And as humans, we worry constantly about being judged by others.

But working transparently, particularly in high-pace environments, is the fastest way to achieve an optimal result.

It should be the default for all of us.

"...transparency is the default setting for our daily lives. It’s the express lane to operating excellence."—John Doerr, Measure What Matters

The first benefit of working transparently is the speed at which you can iterate.

When we have full view of someone else's work, we can see it at all stages of development. We can catch oversights or mistakes before most of the work is done, and correct quickly.

Daniel Ek, CEO of Spotify, has been quoted as saying “We believe that speed of iteration beats quality of iteration, which is why we’re not big on bureaucracy.”

Input from others often brings perspectives that are difficult to come up with by ourselves.

Using checklists and other tools to remind ourselves to consider other perspectives can help. But others will interpret what you've written in different ways, and it's impossible to know exactly what others are thinking.

They may also have information or knowledge you don't. Exposing them to your work early may surface that information.

As one of the characteristics of high-performing teams was described in The Culture Code: "Everyone in the group talks and listens in roughly equal measure, keeping contributions short."

Work as a Form of Communication

Showing your work is a method of communicating.

Even if you describe a deliverable or project in detail in a meeting, each person will expect something different.

Delivering an early draft clarifies those points right away.

One of the best analogies I've come across on this topic was from Sahil Lavingia, the founder of Gumroad, during this conversation.

He described communication like static electricity. If you go a long time without grounding yourself, you'll create a spark and get a shock.

If you ground yourself regularly, the electricity doesn't build up, and you never get the shock.

Communicating works the same way, and showing your work is the most direct way to communicate what you're working on.

Building in public has become a trend started by Pieter Levels of Nomad List, who built has built multiple startups while streaming the whole thing live.

That's extreme, but many others have taken to sharing their progress in some way.

Transparency and sharing in public does a few things:

Building in public, if done genuinely, can have all kinds of benefits.

Being transparent with your work is scary.

We imagine others will judge us based on the first draft, or we'll be criticized for the lower quality.

But this rarely happens. In fact, it can make the criticism easier to take, if you've set expectations.

"This is a quick first draft, but I just want to make sure we're aligned. Please voice any comments or concerns before I start the next one!"This is much lower stakes than if you're presenting a final product to a big group, and it turns out to be completely different than what was imagined.

The discomfort will be worth the gains in speed and alignment.