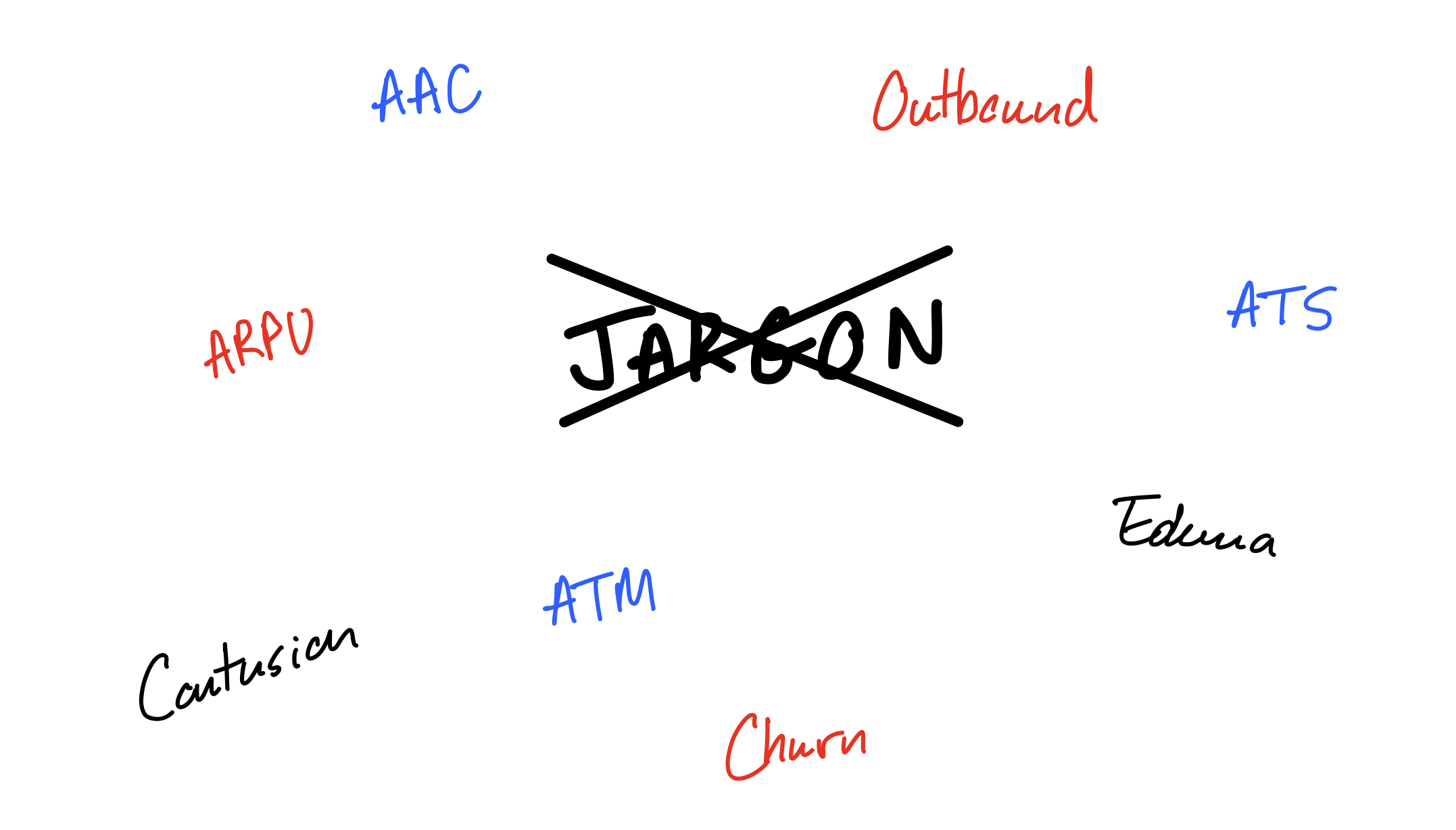 Why I Hate Jargon

It wasn't always this way. There was a time when I loved it. Understanding jargon meant I was learning new things.

But I've come to realize that it hobbles communication, makes others feel bad, and results in a lot of waste.

First, I should clarify the term 'jargon.'

To me, jargon is any of the following:

In other words, if it's likely that someone you are speaking to will not understand the word, it's jargon.

The dictionary definition says as much: "special words or expressions that are used by a particular profession or group and are difficult for others to understand."

Where Does Jargon Get Used?

It can save time when you're speaking with others in your domain.

I used to work with people in the aviation industry—that industry is full of acronyms, nicknames, and specific words. In their case, it saves them lots of time, and often specific acronyms mean something specific to them.

For an outsider, it took me months before I understood what they were talking about.

The other time jargon is used is when there is an information asymmetry (as in my situation above), or when someone wants to create the illusion of an asymmetry.

An information asymmetry is when one side knows more than the other. In negotiations, this is a big advantage. The other side feels like they don't know something they should, and so they accept things without question, or feel as though they don't understand when given an explanation.

You see this in antiquated sales industries. You look at a bill for your car repair, for example, and see acronyms you don't understand. Or your phone company charges for something vague like "transfer fees."

These mean nothing to the end user, but since you don't know what they mean, it's hard to dispute them.

What's So Bad About Jargon?

Before we get into it, I should point out that I am often guilty of using jargon myself.

I work in the tech industry, which has just as many acronyms and terms as any other. I like to read and learn about things like mental models, and I often use those terms in conversation as if the other person should know what I'm talking about. But I'm trying to get better.

With that said, I think we should all be campaigning to reduce jargon in our work and personal lives. Here's why.

Jargon obscures clarity: When we use a big, fancy word, or an acronym, we like to think we're being clear. A word like "feasibility" must have a specific meaning, right?

Not quite. Words ending in -ility are a tell, but it's not always so obvious. Politicians use words and phrases full of jargon all the time. They sound good when we hear them, but they mean nothing.

When we hear these words and phrases, we nod along and think "mmhmm." When we think about them later, we realize we don't know what they mean. Or worse yet, we spend time doing something believing we know what they mean, when the other person thought something much different.

Jargon makes others feel inferior: When someone says something with confidence, but we don't understand a word or a phrase, we feel bad. We are made to feel as though we should know what it means, and then we don't ask for clarification for fear of looking stupid.

This is why jargon is used as an advantage in situations like negotiations and sales; it creates the illusion that one side knows less than the other person.

While it can be an advantage there, it creates a big communication barrier.

If one side is scared to sound dumb by asking questions or probing further, they won't say anything.

In an organization or a team, this is a huge handicap. Almost immediately, communication efficiency takes a big hit. This causes inefficiencies in future work, project delays, and miscommunications which compound if not resolved.

I see it often within the same company but between different teams. Every domain has their jargon, but if they don't work to remove it when interfacing with others, it causes big problems.

So Where Should Jargon Be Used?

There are two situations where jargon should be used:

They use complex words all the time. Using them with patients means nothing, which is why good doctors use plain language with patients.

But when they're communicating with other doctors and medical professionals, they can use those complex words to be very precise and convey a lot of information in a short amount of time.

Being able to do so is often critical in emergency care, or when precision is needed.

Creating belonging: Daniel Coyle touches on this topic in The Culture Code:

"When you look at successful groups, a lot of their internal language features catchphrases that often sound obvious, rah-rah, or corny. Many of us instinctively dismiss them as cultish jargon. But this is a mistake. Their occasionally cheesy obviousness is not a bug—it’s a feature. Their clarity, grating to the outsider’s ear, is precisely what helps them function."

These catchphrases read like a motto, or a slogan, and often don't mean much to outsiders, but convey a specific meaning for the group. Some examples Coyle gives:

These are used deliberately within groups to create a sense of belonging. The same mechanism that makes others feel "outside the group" when they don't understand can be used to help your group feel like they're in on something unique and special.

The key here is that everyone in your group is included. If you have specific language at your company, for example, new employees should be trained on it when they join.

Start the Campaign Against Jargon

So, if you see jargon being used where it shouldn't, speak out!

One of the benefits of understanding a wide range of acronyms and terms and other jargon is that you start to realize how annoying it is for others when they don't understand.

But it often takes that level of understanding to build the confidence to speak out against it.

Next time you see someone using jargon in a context where it doesn't need to be, question it. Ask for clarification, or details, or for the person to avoid using it, and explain why.

Go out of your way to explain jargon to people when you notice they don't understand, and encourage them to speak up.

If you don't campaign against it, it will creep in everywhere.

As Daniel Kahneman said in Thinking, Fast and Slow: "If you care about being thought credible and intelligent, do not use complex language where simpler language will do."