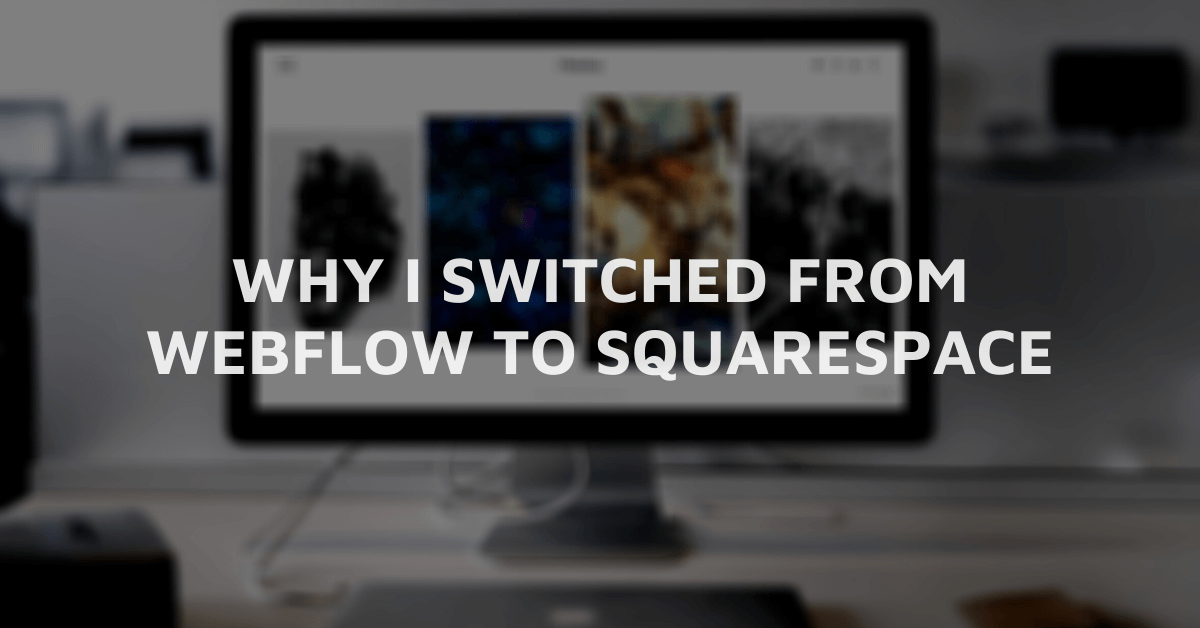 Why I Switched From Squarespace to Webflow

In June 2020, I noticed there was a problem with my website.

It was losing organic traffic, fast.

In fact, over the course of 4 weeks, after growing steadily for months, my traffic dropped by almost 50%. Needless to say, I was concerned.

I hadn't changed anything significant with my site for a couple years, aside from adding more content.

I suspected a recent Google update may have been to blame, but I didn't know why I would have been penalized.

That was until the topic of site speed came up at work. We had been looking at improving the speed of our company blog, because it was known to be slow, and the hypothesis was that was restricting our organic growth.

The benefit of Squarespace is that the majority of the work is done for you.

But as with most things, abstraction adds opacity. Since they do everything for you, you don't know what's being done unless you look at the code (and know how to understand it).

Thankfully, Google has tools built for evaluating websites in areas like speed, SEO, and accessibility.

The main one is called Lighthouse, and you can run it from Chrome on any site by going to Developer Tools > Lighthouse.

PageSpeed Insights is another, and you just have to go to this page and enter the URL you want to check.

I decided to evaluate my Squarespace site, wondering if perhaps speed or something else was the problem.

Here's how my Squarespace home page, which had some short text and a photo, graded out:

Not pretty, in other words.

One of my book notes, which is a little more text-heavy, graded out even worse:

These pages weren't "heavy" by any means. Primarily text, with some small (<40kb) images.

The ease of use of Squarespace is driven by the themes they provide.

But those themes have a cost in terms of speed. The code which makes them work also slows down the site.

I'd been eyeing Webflow for a while, and they'd come a long way in terms of ease of use, educational content, and themes since I'd last looked.

I decided then that I was going to make the switch, and I accomplished it in less than a week.

An evening spent going through Webflow University, their detailed educational curriculum, and a weekend spent creating my new site, was all it took.

I didn't even end up using a theme, choosing to build the site from scratch instead.

The results speak for themselves.

Here's the new grade for my home page:

And for the same book notes page as shown above:

Even my main book notes page, which is by far the longest and most image-heavy page on my site, gets a perfect score on the performance test:

The result? My traffic recovered and started back on the growth trajectory it was on almost immediately.

Speed matters on the web—study after study show the effects.

And speed seems to matter even more for organic ranking now.

I used to recommend Squarespace for people just getting started with building a website or blogging.

The penalty in speed, however, plus the increased ease-of-use with Webflow's educational content and templates, has made me change my recommendation for all but the least technical users.

Squarespace has a great product. It just doesn't seem to be keeping up on the speed side.

You can get started with Webflow's free trial here.